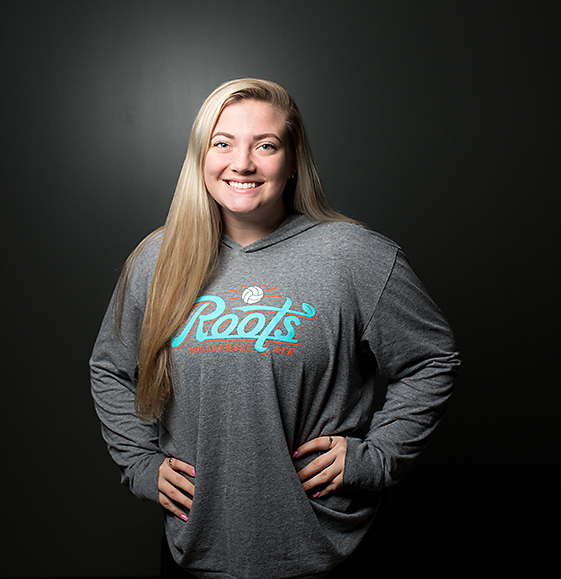 Rylee was born and raised in Austin, Texas. She attended Westwood High School and played for the Lady Warriors. Westwood athletics has dominated the court for many years, winning multiple District, Bi-District, and State Championships. As a member of the Lady Warriors varsity volleyball team, Rylee led her team to District, Bi-District, and Area Championships. Her strong performance on the court earned Davis District Honorable Mention honors (2017) during her senior season. While attending Westwood, she was also a member of the choir.

Rylee is proud to be Roots Volleyball alumni and played five (14U-18U) successful seasons with our program. She was a key contributor and leader on all five of her club teams. Davis’ 2014-2015 team, 16 Green, narrowly missed qualifying for the USAV Girls’ Junior National Championships at the Pacific Northwest Qualifier with a 3rd place finish in Spokane, Washington. During her 17U season (2015-2016) with 17 Green, she guided her team to a 5th place finish at the Colorado Crossroads National Qualifier in Denver, Colorado and at the Windy City National Qualifier in Chicago, Illinois. In her final season with Roots Volleyball (2016-2017), she led 18 Black to their highest finish of the season earning a silver medal at the Colorado Crossroads National Qualifier in Denver, Colorado.

Davis graduated from Westwood in 2017 and was heavily recruited to play collegiately. She committed to continuing her volleyball career at the next level as a Lady Tornado with Concordia University. Rylee saw action in 32 of the Tornados’ 33 matches as a freshman defensive specialist/libero. She grew her stats every time she stepped on the court, finishing second on the team with 27 total service aces and racking up a total of 234 digs on the season. Rylee saw a career-high of 24 digs vs. Southwestern University on September 18th. She also accrued double-digit digs in seven of her last eight matches. Concordia closed out their 2017 season with a hard-fought battle against UMHB in the ASC Semifinals.

Rylee graduated with her Bachelor of Arts in Psychology in 2022 from Concordia.  She also excelled off the court in the classroom as a member of the Dean’s List every semester.

Davis believes it is a coach’s duty to guide young volleyball players to not only enjoy the sport but also reach their full potential on and off the court. While increasing athletic skill is the focus on the court, she also believes team sports are the best avenue to build strong character and work ethic in our future generations.

Rylee resides in Austin, Texas and this will be her 5th season coaching with the Roots Volleyball family.