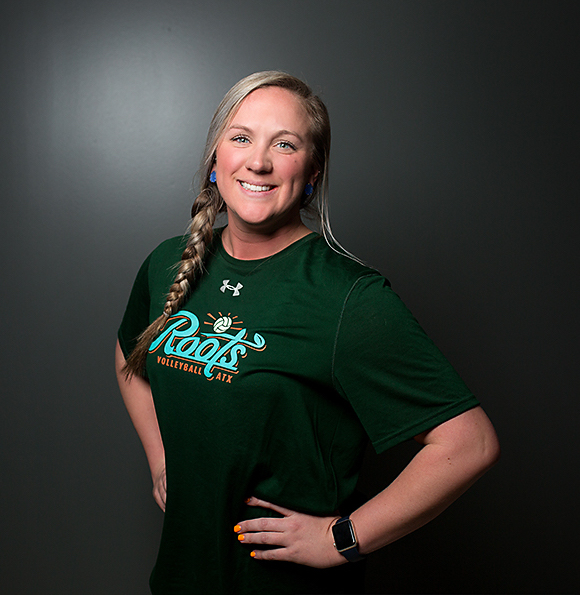 Last season (2021-2022) Korinne was the head coach of 18 Under Armour Green and led her team to 3rd place finish in Indianapolis, IN at USAV Girls’ Junior Nationals (USA division). Additionally, Korinne led her team to two 9th place finishes in the Open division at Music City Volleyball Championships in Nashville, TN and Lone Star Classic 18s Qualifier in Austin, while qualifying for JOs with a first place finish at AVC 18s National Qualifier in Dallas.

Stinson has been actively playing volleyball for 20 years. She was a 3-year letter winner for Nederland High School. Korinne continued her volleyball career collegiately through her commitment to play for Blinn College in Brenham, Texas, a Division l Junior College. She led her team to a 5th place finish at the NJCAA National tournament (2007) and the following year earned the National Championship title (2008). During her final season at Blinn, she earned Academic All-American honors (2008). She continued her education at University of Texas and was instrumental in many successes for the University of Texas Club Team (3 seasons). While at UT, she served as the Club President (2 seasons) and earned honors as a National All-Tournament Team Honorable Mention (2011), All-Conference Team (2012), and National All-Tournament Second Team (2012). She graduated from the University of Texas with a Bachelor’s Degree in Mathematics.

Korinne was born in Nederland, Texas and currently resides in Austin, Texas. She has four siblings – three sisters and one brother. She teaches math and is the varsity head coach at Hyde Park High School. This is Korinne’s 8th season with the Roots Volleyball family.