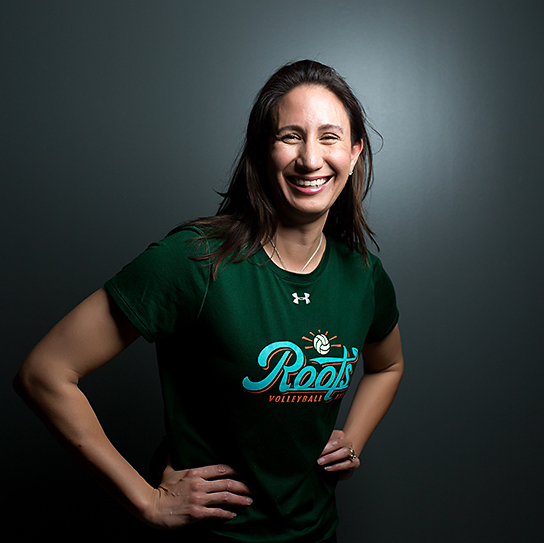 Roots Volleyball is excited to have a former DI National Champion on our staff! Jessica was born in Lakenheath, England and attended high school in San Antonio, Texas. She played volleyball at John Jay High School as a freshman and finished out at Douglas MacArthur High School as a Lady Brahma. During her freshman season, Brannan led her team to a big win in the Texas 5A State Championship (1991). Her efforts on the court earned her All-District honors (1991, 1992, 1993, 1994), All-State honors (1991), Junior All-American honors (1991, 1992, 1993, 1994), and landed her on the Fab 50 list. Jessica was also a member of the US Youth National Team and US Junior National Team. She graduated from MHS in 1995 and continued her volleyball career collegiately earning a full, four-year scholarship to California State University Long Beach.

While at Long Beach (1995-1999), Brannan led her team to the NCAA National Semi-Finals (Final Four) in Spokane, Washington (1997). The following season (1998) she led her team in securing the NCAA National Championship title. Her 1998 team was the first Division I volleyball team in history to finish a season undefeated with a 36-0 record. Her high level of played earned Jessica numerous accolades including All-Conference awards (1995, 1996, 1997, 1998) and All Final-Four Team awards (1997, 1998). Brannan worked just as hard in the classroom as she did on the court and earned Toyota Student Athlete of the Year honors (1998-1999). Jessica graduated in 1999 with a Bachelor of Science in Business.

Brannon has an impressive 10-year, club-coaching career and brings a wealth of experience and knowledge with her. She has coached for Texas Juniors, Cal Juniors, Club Long Beach (Beach Mizuno), and East Coast Power. She led her 2018-2017 team to an 11th place at the USAV Girls’ Junior National Tournament (National division). In her first season with Roots Volleyball (2019-2020), Jessica served as the assistant coach for 15 Under Armour.