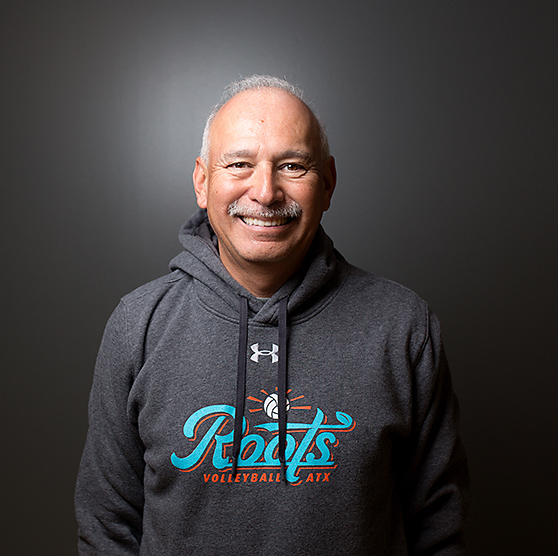 Last season (2021-2022) Eloy Rodriguez served as the head coach for 14 Under Armour Blue. He led his team to a 43-15 season record. Serving played a huge part in the team’s success – as a team they served almost 90% on the season.  The season highlight was finishing 8-1 at the Sunshine Classic National Qualifier in Orlando, FL with a 5th place finish.

Eloy has been a volleyball coach, private lesson instructor, and certified TASO officiate/referee for 17 years. Eloy served 8 seasons as the head middle school coach at Hill Country Christian School of Austin.  In early 2016, Eloy earned a CAP I Certification from USA Volleyball. The four cornerstones of the USA Coaching Accreditation Program are coaching with integrity, education, commitment, and enthusiasm.

Eloy’s expertise is in developing the core skills for these young athletes. His style of coaching brings encouragement, confidence, and positive results to his players and their family members. Prior to joining Roots Volleyball, Eloy coached three years with Austin Metro Volleyball Club.

You can count on his coaching style to be open and honest. His focus will be to blend techniques, practical knowledge, and strategy. Together, these will help provide a foundation for continued player development.

Eloy is married and has two children. He is a graduate of Concordia Lutheran College in Austin and is a Supply Chain Manager for Flex, Inc. In addition to volleyball, Eloy enjoys a variety of other sports such as golf, bowling, running, and playing with his grandson, Nathaniel. This is Eloy’s 16th season coaching with the Roots Volleyball family.