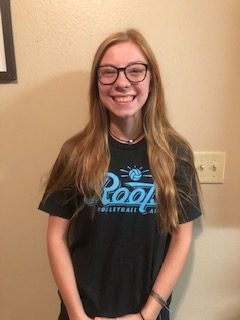 Chyanne was born in Corsicana, Texas and grew up in a town, a mile long, 20 minutes outside of Corsicana – Dawson. She moved in with her father her freshman year of high school and attended Teague High School in Teague Texas (2017 gradate). She was a multi-sport athlete earning awards in both sports including 2nd team All-District (2015, softball), 1st Team All-District (2017, softball), Team MVP (2017, softball), and Best Defensive Team Player (2016, volleyball). She has plans to attend McLennan Community College in General Studies to then take the teacher certificate to become a coach/teacher.

Previously she coached one season with Waco Lighting. She currently resides in Waco, Texas. This will be Chyanne’s first season coaching with the Roots Volleyball family.