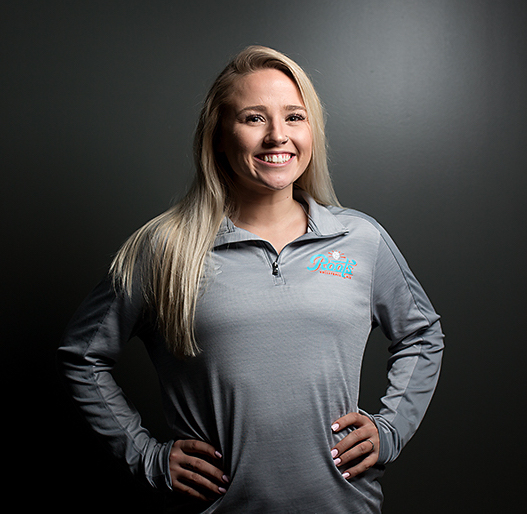 This past season (2020-2021) Abby served as the assistant coach for 17 Under Armour Green. They secured a bid to Nationals (American division) and a bronze medal at Lone Star Regionals. 17UA Green closed out the season with a solid 5th place finish at USAV Girls’ Junior Nationals.

Abby grew up in Abilene, Texas and moved to Georgetown to finish out her junior and senior years of high school. She was a Varsity starter and graduated in 2013 from Georgetown High School. During her time at GHS, she served as their team captain and won All-District, Academic All-District, and All-Tournament Team honors. She also participated in Best Buddies as a peer buddy. Abby is passionate about their mission of being dedicated to establishing a global volunteer movement that creates one-on-one friendships, integrated employment, and leadership development for people with intellectual and developmental disabilities.

Abby continued her volleyball career collegiately for the Lady Cru at Mary-Hardin Baylor (2013-2017) in Belton, Texas. She was her team’s captain, a member of the Dean’s List, and earned All-Conference Academic honors. Fuchs (previously Voskuil) made school history when she was the first ever member of the Cru volleyball program to be named to the First Team All-West Region (2014) and AVCA All-American Honorable Mention (2014).

Abby graduated from Mary-Harding Baylor with a Bachelor of Science in Sports Management with a minor in Marketing (2017). She moved back to Austin in May 2018 and is currently working in the marketing field. In her free time, she takes her dogs (Koda and Apollo) on walks, plays sand volleyball, and works out. She resides in Austin with her husband, Connor. This is Abby’s 5th season with the Roots Volleyball family.

Abby believes coaching youth volleyball is one of the most important jobs you can hold. While it is a job, she believes it is more of a responsibility to help shape the paths, lives, and integrity of young women. She believes teaching the fundamentals of volleyball, good sportsmanship, and how to be an effective member of a team, will result in creating the next generation of strong, successful women in our society.